A Half-Baked Dissection of "The Second Mountain" by David Brooks

Every so often, I realize that I have a copy of The Second Mountain and, save one largely forgotten Twitter spasm, I haven't really written anything about it. And why?

But I really do want to get this off my plate with all due haste, so I did something a little bit different. Rather than writing this out, I opened Audacity and recorded an impromptu podcast. I did this in part because I managed to jack up the nerves in my arm, and while whatever caused this is mostly healed, it's still not worth the pain in my hand, wrist, forearm, upper arm, shoulder and neck (that pain moves, boy) to write thousands of words about the man. I've been saving the typing for things that are arguably more important, like query letters that have been rejected 100% of the time.

You'll excuse me if this is rambling - I made no notes at all, recorded it about three days after the last time I read any of it, and didn't edit out any errors. Believe me, that's exactly the level of effort this book merits.

And away we go:

Posted by Andrew Johnston at 7:28 AM No comments:

A Crisis of Harmony: King Know-it-All 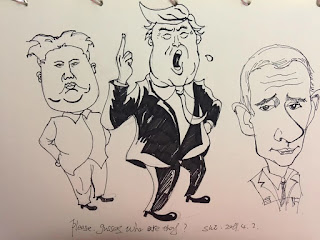 This is a post that began with an SCMP article on Chinese-made Donald Trump kitsch that they are still selling in China. This creates a conundrum for me. Much like the documentary itself, I really want to make this post series politically neutral, even as I knew that this was going to be impossible. Let's be real, here - we all know where this started.

So let's drop the pretext for a moment and talk Trump. God willing, this will be the only time I have to do this.

Read the rest on Find the Fabulist.

Posted by Andrew Johnston at 7:30 AM No comments:

A Crisis of Harmony: One Month Out

It's been about a month since I finished editing A Crisis of Harmony and around three weeks since releasing it. Those of you who've seen it (and if you haven't, then what are you waiting for?) will recall that I ended it with skepticism that Sino-American relations would improve - skepticism not shared by my interview subjects.

Sometimes you're not happy to be right. 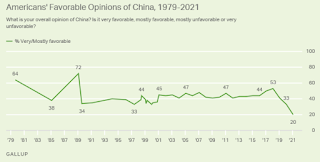 Recent polling by Gallup and Pew suggests that not only have American opinions of China not improved since last year, they've actually gotten much worse. Gallup's polling shows that just 20% of Americans have a remotely favorable opinion of the PRC, the lowest they've ever recorded. This is comparable to the American opinion on Russia, and just a few points ahead of Iran.
But it's the more detailed Pew poll that's most interesting here. I encourage you to read the entire thing - it's long but fascinating - but here are some of my personal takeaways, the bits I'm still chewing over myself:
Continue reading on Find the Fabulist
Posted by Andrew Johnston at 7:30 AM 1 comment:

和谐的危机 A Crisis of Harmony: Culture Clash in the Middle Kingdom

I'll be doing some supplemental posts and videos relating to the documentary. The written posts will appear in this section of my writing blog. Some of it might find its way here, but I'm going to spare you too much self-promotion.

A Crisis of Harmony: The Fear Game

Not an hour ago, I opened a stream from Bloomberg expecting to see news on a report from the WTO. Instead, I was treated to an eyeful of Mike Pompeo, former U.S. Secretary of State and neo-McCarthyite crank. He was bragging about how successful he'd been in turning public opinion against the "Chinese Communist Party." He often speaks like this, in part because it allows him to repeatedly use that scary word "Communist," but also because it lets him act like his campaign to inculcate paranoia in the American people is really only aimed at the government, not the people.
This is garbage. Follow Pompeo's speeches as I've done, and you'll know that he also teaches people to assume that all Chinese people are party members. Friendly Chinese people are suspect, he says; they're liars, behaving that way to create a new dupe. International students are suspect, Chinese Americans are suspect, even white people like me are suspect because we're too friendly to them.
And you know what? Pompeo was a terrible Secretary of State, but if inculcating anti-Chinese fear really was one of his objectives, then it's one area where he succeeded. 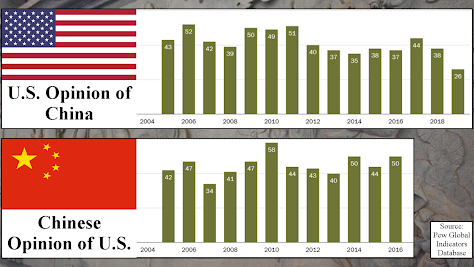 Opinion of China pitched down sharply during his tenure - not all because of him, obviously, but he must be proud. Tailgunner Joe must be looking up and smiling.
But I'm not afraid of China or the Chinese. I don't think people here are brainwashed, or conniving, or aggressive. And if you're open-minded, I hope you'll hear my case.
A Crisis of Harmony will premiere February 10th, 2021 at 8:00 PM Central time. Watch it then if you can, later if you can't - or both, it could help my metrics. I'll do a Q&A video if I can get enough questions, so feel free to ask, either in the comments on the video or via my website. I do look forward to hearing from you.
Posted by Andrew Johnston at 8:00 AM 2 comments: